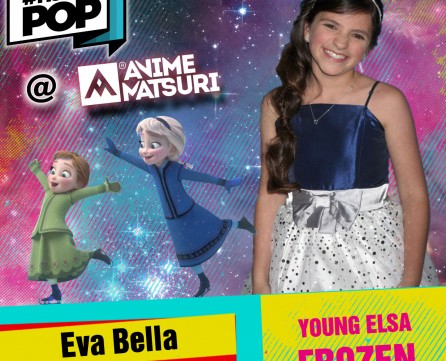 Born in Omaha, Nebraska, Eva Bella and her family moved to Los Angeles when she was just six years old to pursue her dream of becoming a famous actress.  Shortly after arriving in L.A., Eva Bella booked her first professional gig in a Disney Jr. commercial.  This was followed by a recurring role on NBC’s Parenthood.  Since then, this talented and charismatic actress has appeared in many other television shows and films including Mad Men, Jessica Darling’s IT List, ‘Young Elsa’ in the Oscar-winning film FROZEN, ‘Shimmer’ in the hit Nick Jr. show, Shimmer and Shine, Family Guy, ‘Young Kayo’ in the Oscar-nominated film The Wind Rises, Kung Fu Panda 3 and Despicable Me 2, to name a few.

Despite her busy schedule, Eva Bella finds time for reading, art, sports and is also straight ‘A’ student.