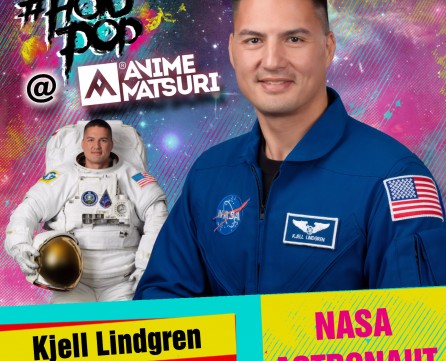 Summary:
Dr. Kjell N. Lindgren was selected by NASA in 2009. He spent most of his childhood abroad and returned to the U.S. to complete his education and earn a Doctorate of Medicine from the University of Colorado. He is board certified in emergency and aerospace medicine. After serving as the Deputy Crew Surgeon for STS‐130 and Expedition 24, he was selected as an astronaut in June 2009 as one of 14 members of the 20th NASA astronaut class. Dr. Lindgren flew on Expedition 44/45 and logged 141 days in space. He participated in two spacewalks and in more than a hundred different scientific experiments.

Personal Data:
Born in Taipei, Taiwan. Lived in the midwestern United States, but spent most of his childhood overseas living in England. Married to the former Kristiana Jones. They have three children. His parents, Randahl and Anita Lindgren, reside in Burke, Virginia. His sister, Niki Lindgren, lives in Los Angeles, California. Interests include spending time with his family, running, reading, movies, photography, amateur astronomy and church activities.

Education:
Completed his freshman year at Lakenheath High School in the United Kingdom. Participated in Virginia’s Governor’s School at William and Mary College during the summer of 1990. Graduated from James W. Robinson Secondary School Fairfax, Virginia in 1991. Received a Bachelor of Science degree in Biology (minor in Mandarin Chinese) from the U.S. Air Force Academy in 1995; a Master of Science degree in Cardiovascular Physiology from Colorado State University (CSU) in 1996; and a Doctorate of Medicine from the University of Colorado in 2002. Completed a three‐year residency in emergency medicine, including a chief resident year at Hennepin County Medical Center in Minneapolis, Minnesota in 2005. Completed a National Library of Medicine Post‐Doctoral Fellowship and Master of Health Informatics at the University of Minnesota in 2006. Completed a two‐year residency in aerospace medicine (2008) and a Master of Public Health (2007) at the University of Texas Medical Branch (UTMB) in Galveston, Texas. Dr. Lindgren is board certified in emergency medicine and aerospace medicine.

Experience:
At the U.S. Air Force Academy, Dr. Lindgren was a member of the “Wings of Blue” parachute team, where he served as an instructor, a jumpmaster and a member of the academy’s intercollegiate national championship team. As a part of his masters studies at CSU, Dr. Lindgren conducted cardiovascular countermeasure research in the Space Physiology Lab at NASA Ames Research Center in Sunnyvale, California. He conducted high‐altitude physiology research during medical school. Dr. Lindgren began working at Johnson Space Center in 2007. As a Wyle‐University of Texas Medical Branch flight surgeon, he supported International Space Station training and operations in Star City, Russia and water survival training in the Ukraine. At the time of his selection to the astronaut corps, he was serving as the Deputy Crew Surgeon for STS‐130 and Expedition 24.

NASA Experience:
Dr. Lindgren was selected in June 2009 as one of 14 members of the 20th NASA astronaut class. Following the completion of two years of training and evaluation, he was assigned technical duties in the Spacecraft Communicator (CAPCOM) branch and Extravehicular Activity (EVA) branch. Dr. Lindgren served as lead CAPCOM for Expedition 30.

Spaceflight Experience:
Expedition 44/45 (July 2015 to December 2015). Along with crewmates Russian Space Agency cosmonaut Oleg Kononenko and Japanese astronaut Kimiya Yui, Dr. Lindgren launched on the Soyuz TMA‐17M (callsign Antares) from the Baikonur Cosmodrome in Kazakhstan on July 23, 2015 and docked to the station after four orbits. They joined Expedition 44 crewmembers Russian cosmonaut Gennady Padalka and “One Year Mission” crew members NASA astronaut Scott Kelly and Russian cosmonaut Mikhail Kornienko. During their 141 days aboard the station, the Antares crew participated in more than a hundred different scientific experiments including research in human physiology, fluid and combustion physics, Earth and space science and technology development. Their research included work with the “Veggie” lettuce experiment which represented the first time a U.S. crew has eaten a crop grown on orbit. The crew conducted dozens of repairs and enhancements to the station’s systems, including the installation of the NORS high pressure gas replenishment system and internal cabling in preparation for the commercial crew vehicle docking and the Node 1 galley. Dr. Lindgren and Expedition 45 Commander Scott Kelly conducted two spacewalks in late 2015. During their first spacewalk, Lindgren installed a thermal blanket on the Alpha‐Magnetic Spectrometer and routed external cables, while Kelly performed maintenance on the station robotic arm. Their second spacewalk focused on maintenance of the station external thermal control system. Lindgren, Yui and Kononenko landed their Soyuz spacecraft in Kazakhstan on December 11, 2015. He has logged 141 days in space and 15 hours and four minutes of spacewalk time.